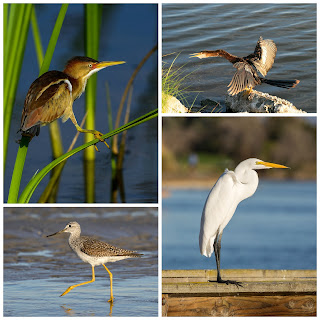 If you are a big bird watcher, then the best bed and breakfast in Fort Myers Beach, Mango Street Inn, is the place to be! There are many different types of beautiful birds that can be spotted on the shores around Fort Myers Beach. While there are several birds, we'd like to highlight some of our favorites. For any of you out there that aren't very familiar with bird terminology, when we refer to plumage, we are describing their feathers. Also, we are going to take a look at three different categories of birds that may be spotted around our great bed and breakfast in Fort Myers Beach, the shore birds, wading birds, and common birds. 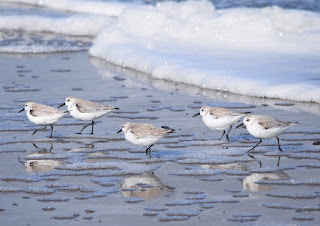 The Sanderling has short black legs that blur as they scurry across the beach. They are medium sized birds that are recognizable by their black legs and bills and obsessive wave chasing habits. These birds breed only on High Arctic tundra, but during the winter they live on most of the sandy beaches of the world, including Ft. Myers Beach.

This shorebird almost looks like a calico cat, with its patches of orange, black, and white. The Ruddy Turnstone has orange legs and a unique pattern across its body, so you can easily spot this bird in a crowd.  While these long-distance migrants breed in the arctic tundra, they spend their off seasons on rocky shorelines and sandy beaches on both North American coasts, as well as South America, Eurasia, Africa, Australia. 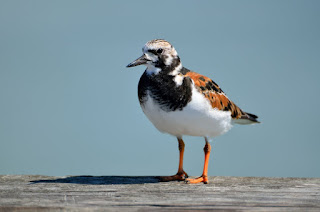 This shorebird likes to make an entrance! The Greater Yellowleg frequently announces its presence by making a piercing alarm call. It has a mostly gray body with white spots throughout its feathers.

The Dunlin has a bright reddish back and black belly. It also has a long, drooping bill that nearly distinguishes it from all other birds. It’s breeding grounds include across the top of North America and Eurasia, and in the winter along coasts around the northern hemisphere. 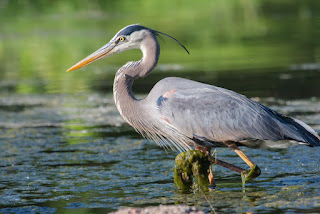 These majestic birds will usually be found either poised on a river bend or cruising a coastline with slow, deep wingbeats. This blue-grayish bird can strike very rapidly to grab a fish at a moment’s notice. When they are in flight, look for their widespread wings and tucked in neck with its long legs trailing behind.

The snowy egret is a flawless looking bird with it’s pure white plumage, black legs, and yellow feet. Interesting fact about the Snowy Egret, at one point it’s curving plumes were once so coveted by the fashion industry the species had become endangered. Amazingly, in the early twentieth century, conservationists rallied together to protect this beautiful species and it is now once again a common sight in coastal wetlands. 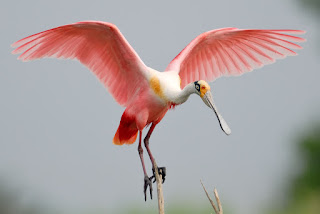 This magnificent creature is truly eye catching! It’s bright pink color leads many Floridians to believe that it’s a flamingo, but it’s actually a Roseate Spoonbill. These birds have an oddly shaped flat bill, in which they use to catch small food items out of the water.

The Great Egret is a dazzling sight indeed. These are large, beautiful birds with a large wing span, white in color with a yellow bill. They are slightly smaller than the blue heron but they hunt in classic blue heron fashion.  They will wade through the wetlands, striking at their pray with a deadly jab of their yellow bill.

This tiny heron is one of the cutest birds you’ll ever see, it will use its long toes and cling to the stems of cattails and reeds. The interesting about this bird is that it often goes unseen because of its habitat choice, except when it flies, but it’s cooing and clucking call notes are frequently heard at dawn and dusk. 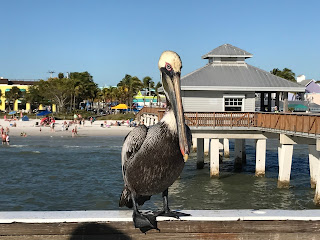 The Brown Pelican will feed by plunge-diving from high up and using the impact to scare their fish prey into being stunned before they scoop them up. They are very commonly seen around Ft. Myers Beach.

The Anhinga is also known as the “Snakebird.” This bird can very it’s buoyancy in water, sometimes with only its head and neck above water. Anhingas have a combination of black, brown and white feathers and yellow bills. They are silent most of the time, but around nesting colonies, they will make croaking and clicking sounds. 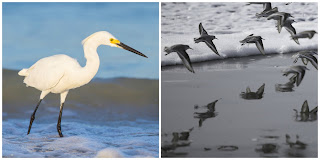 While all of these birds are truly beautiful, please remember not to feed them.
To all you fun bird watchers out there, good luck and we hope to see you soon at the best bed and breakfast in Fort Myers Beach, Mango Street Inn!

Popular posts from this blog 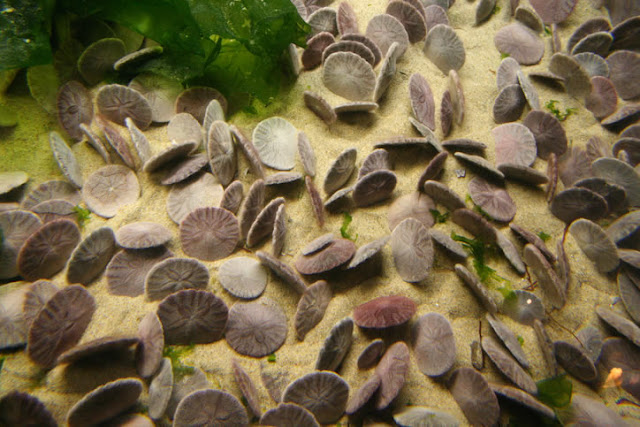 One of the most popular shells at Fort Myers Beach is the Sand Dollar! Live Sand Dollars are plentiful in the waters of Fort Myers Beach and are beautiful too look at during low tide. Locals and tourists alike enjoy walking the beach in the mornings looking for Sand Dollar skeletons (dead Sand Dollars) to add to their shell collections. Because they are so popular, we thought you might enjoy learning a bit more about these lovely sea creatures. When you stay with us at Mango Street Inn , you're sure to see a lot of them! In this week's blog we highlight 7 fascinating facts you probably never knew about Sand Dollars. Sand Dollars are a Type of Sea Urchin Sand Dollars are a type of Sea Urchin, only instead of long pointy spines, Sand Dollars have short spines on the outside of their shells that are covered in very small hairs. They are frequently found together due to their preference for soft bottom areas (convenient for reproduction). Folklore & Legend Repre
Read more

Day Trippin' with the Animals at Fort Myers Beach 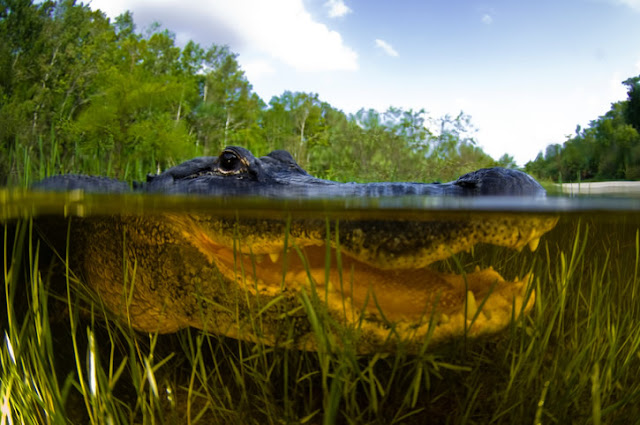 Everyone loves a good day trip! And hey, when you're staying at Fort Myers Beach at Mango Street Inn , you are centrally located around more great day trip adventures than you can probably handle in a single trip. That means you'll just need to come back 😉. We know you don't want to read a novel, so we'll divide some of our guest's favorite day trip destinations into three different blogs and categorize them by theme. So for you animal lovers, we suggest you bookmark this one for easy access when planning your travel itinerary for your Fort Myers Beach vacation . Here are SIX guest favorites! 1. Everglades Tours Wildlife abounds in the Everglades and there are several guided tours you can take, from relaxing to adventure seeking. Several tour companies offer airboat tours, where you'll glide across Everglades National Forest viewing alligators, birds, manatees, and more. A few of the tours guarantee you see manatees year round ... in fact, they advertise,
Read more 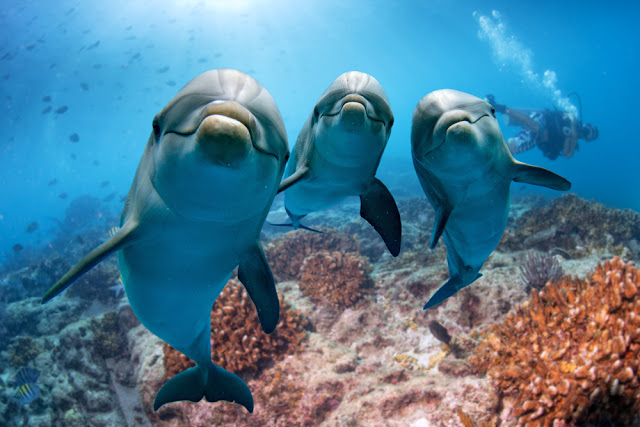 There is something purely magical about watching dolphins swim and play in their natural habitat. At Fort Myers Beach you are able to do just that! From our beautiful Inn, located across the street from the beach, you can take a short walk and submerge yourself into the beautiful scenery and watch these magnificent creatures. You can often see them off shore swimming up the beach, as well near the pier around meal time. To get yourself more acquainted with these incredible mammals for your next trip to the best bed and breakfast in Fort Myers Beach , here are 7 fun and interesting facts that you may not know about dolphins:  1.       Dolphins can recognize themselves in a mirror   You might have heard this before, but dolphins are extremely intelligent creatures. They are even as smart as apes. A dolphin’s brain is similar to the size of the human brain. This means that their brain is about 4-5 times larger than animals similar in size.  2.       Dolphins are carnivores
Read more